The city is transformed

Every year as from 2012, the Opera Festival takes place in Brescia at the end of the summer, in September.

In order for you to enjoy the evocatory, elegant and bubbly atmosphere of the Opera Festival, our Centre offers you a comfortable location in the heart of the city, with free internal parking, retaurant and garden, a few steps away from the Festival's venues. Here you will be able to easily enjoy the Opera event, winner of the Filippo Siebaneck Award in 2013, and find a peaceful and relaxing corner for yourself to be absorbed by the atmosphere of the event, thanks to an elegant, classical and sophisticated accommodation solution. 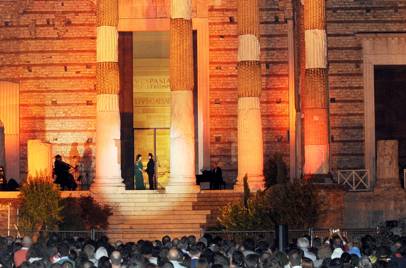 In 2013, the Opera Festival of Brescia received the Filippo Siebaneck Award, from the National Music Reviewers' Association, for best Italian musical initiative. The award is part of the Franco Abbiati Awards, established in Bergamo in 1980, which have since then, with the patronage of the Ministry of Cultural Heritage and Activities, rewarded the best artistic and musical initiatives especially significant culturally on a nationwide scale. The Filippo Siebaneck award was conferred to the Opera Festival of Brescia in 2013, as the initiative was acknowledged as important for both its musical significance and its ability to make opera accessible beyond opera houses.

The Festival is both a sophisticated and folk event, which fills the historic city centre of Brescia, from dawn to sunset, not only with opera singers, but also with precious moments for listening to music, sublime atmospheres, alongside the best of the Italian opera tradition, which in some representations, merges with other musical languages (jazz, electronic, swing, pop, rock and contemporary music), giving birth to vanguard experimentation.

All the events and performances are completely free of charge, in the spirit of music as heritage of all people, and the audience is always drawn into taking part in theevent with new and funny initiatives(such as the social contest of the 2016 edition). The best of the Italian opera tradition, the experimentations and the musical contaminations are put to stage in the precious location of the streets and squares of the historic city centre of Brescia, in the evocatory atmosphere of the Roman forum and of the main city square, from the balconies of the historic buildings and inside the courtyards of the nobles’ mansions. The streets are filled with lovers of music and opera for a Festival that unites culture with fun and the awesomeness of sounds and lights.