The Statute of the Paul VI Centre

The Pastoral Center, Paolo VI, canonically erected in quality of Religious Foundation with legal personality by decree of the Diocesan Ordinary of Brescia, of 15 February 1975, has obtained the recognition of juridical personality from the Italian order as an ecclesiastical body with DPR 21/07/1987 Headquartered in Brescia, Via Gezio Calini N. 30.

2.1. The Paolo VI Pastoral Centre has non-profit purposes and is intended to promote the permanent formation of clergy, of religious men, of religious women, and to inspirit apostolic laity.

2.2. To achieve its goals, the Paolo VI Pastoral Centre welcomes, according to Catholic ecclesiastical style, permanent formation activities of clergy, religious men, religious women and the activities of lay people in accordance with the principles of the Catholic religion.

2.3. The Paolo VI Pastoral Centre is the ordinary meeting seat of the Diocesan Collegiate Bodies and of the Commissions and activities promoted in the different areas of the Diocesan Curia.

2.4. The goals of the Paolo VI Pastoral Centre are also achieved by the reception: a) of systematic training for the young clergy; b) of various spiritual and cultural activities for priests, religious men, religious women and lay people; c) of initiatives for catechesis and Christian education of associations and groups working in the spirit of apostleship; d) of people who, sharing the principles and goals of the Paolo VI Pastoral Centre, require hospitality.

2.5. More generally speaking, The Paolo VI Pastoral Centre encourages the promotion of all those initiatives, compatible with its own purposes, required by the signs of the times in the spirit of the Vatican Council II.

To achieve its goals, the Paolo VI Pastoral Centre may also make use of the work of priests, religious men, religious women and laymen appointed to such by the Diocesan Ordinary.

The Patrimony of the Paolo VI Pastoral Centre consists of:

a) the property already mentioned in the decree of erection of 15 February 1975 and represented in particular by the real estate complex where the Paolo VI Pastoral Centre exercises its activities, located in Brescia, Via Gezio Calini n. 30 and bounded by Via Gezio Calini, Antonio Callegari, Alessandro Monti, already the seat of the Santangelo Seminary of Brescia;

b) a provision of government bonds of a nominal amount of € 11.000,00 = (Euro Eleven thousand/00), also bought by means of the free gift given by Supreme Pontiff Paul VI at his time, and mentioned in the decree of erection of the Paul VI Pastoral Centre;

c) the contributions, for any reason whatsoever, of Entities or private individuals explicitly destined to the patrimony;

d) the movable and immovable property expressly coming, for any reason whatsoever, to be destined to the patrimony;

e) the sums drawn from the income that the President's board can, with its own deliberations, allocate to the assets.

The Paolo VI Pastoral Centre, except as provided for in the previous article 4), to achieve its own purposes:

a) disposes of the income of the assets;

c) upon consent of the competent Ecclesiastical Authority and in accordance with the civil laws may receive legacies;

d) disposes of any eventual revenue in connection with the activities with which the goals of the Paul VI Pastoral Centre are achieved.

The Paolo VI Pastoral Centre, with a special act of the President's Board and with the explicit approval of the protection bodies of the Ecclesiastical Authority, can and will contract loans with credit institutions both for the ordinary and extraordinary maintenance of the property and for its specific activities.

The financial year of the Paolo VI Pastoral Centre commences on 1 January and ends on 31 December of each year.

Within the month of June following the year in question, the President will present the Diocesan Ordinary the balance sheet of the Paolo VI Pastoral Centre.

The bodies of the Paolo VI Pastoral Centre are: the President's Board, the Director, the Board of Auditors.

The positions of the Chairman of the President's Board, of Councillor, with no special assignments, as well as of Auditor, are taken up free of charge.

Regardless of what is provided in the following points 7, 8 and 9, the members of the bodies of the Paul VI Pastoral Centre will immediately cease to perform their duties if the Diocesan Ordinary requires such or if the majority of the members resign.

The President's Board is composed of nine members appointed by the Diocesan Ordinary, which indicates, among these, the President and the Director of the Paolo VI Pastoral Centre.

The President presides the meetings of the President's board and is the Legal Representative of the Paolo VI Pastoral Centre.

The President's Board remains in office for five years, and however with expiration in relation to that of Diocesan Collegiate Bodies; its components can be reconfirmed.

The President's board has the office of managing the Paolo VI Pastoral Centre, and therefore, among other things, it:

a) approves the annual balance sheet , within April;

b) approves the strategic addresses of the Paolo VI Pastoral Centre;

c) deliberates acts of extraordinary administration with measures that become executive only after the approval of the ecclesiastical authority;

d) provides, where appropriate, the adoption of a specific Rules of Procedure set, to regulate the organizational and management aspects of the Paolo VI Pastoral Centre and the operational aspects of this Statute;

e) deliberates on acts involving changes in the assets;

f) decides on the recruitment and dismissal of directors and managing positions.

The President's Board's decisions are valid when at least half of its members are present.

Any Decision is valid if obtained by a simple majority vote of the present.

The Director is a Diocesan Presbytery, who holds office for five years, and in any case with expiry in relation to that of Diocesan Collegiate Bodies and can be reconfirmed.

The Director is responsible for:

Priests, religious men, religious women and lay people who work in the Paolo VI Pastoral Centre for any reason will have to comply with the directions expressed by the Director, in the performance of his/er duties.

9.1. The Board of Auditors is composed of three members, all nominated by the Bishop of Brescia, who also designates the Chairman of the Board, of whom at least one is registered in the register of statutory auditors and at least one other meets the requirements of law to cover the office of Mayor of society.

9.2. The Board of Auditors is responsible for:

a) invigilating on compliance with statutory and civil regulations,

b) ensuring that the principles of sound administration and that consistency of management with statutory goals are respected,

c) verifying the accounting and, therefore, the annual balance sheet in its accordance with the accounting records and principles used, as well as in its ability to faithfully and fully represent the situation of the Institute and the facts occurred,

d) preparing the Auditors' Report on the Annual balance sheet.

9.3. The Board may be entrusted by the Bishop of Brescia or the President's Board with other supervisory functions in relation to compliance with canonical and civil regulations.

9.4. Membership resignation is effective from the moment it is accepted by the Bishop of Brescia. In case of replacement of a member, the substitute shall hold office until the expiry of the term of office of the Board. If the majority of the members are absent, even for renouncement accepted by the Bishop, the whole Board lapses.

9.5. Auditors have the right to attend the meetings of the President's Board without voting right.

9.6. The Report of the Auditors’ Board is prepared annually and is transmitted to the diocesan Ordinary.

The Paolo VI Pastoral Centre is constituted without limits of duration.

In the event of extinction, for any cause, of the Paolo VI Pastoral Centre, the patrimony will be devolved to the Diocesan Entity of Brescia or to any other body designated by the Diocesan Ordinary.

For anything not expressly provided for in this Statute, the Code of Canon Law and the civil laws governing Religious and Worship Foundations and generally ecclesiastical institutions, are to be referred to. 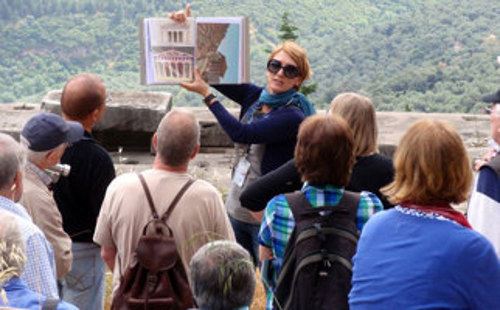 We're the ideal for you, as we're getting prepared for the Italian Capital of Culture 2023. 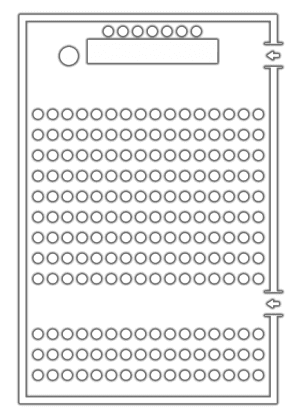 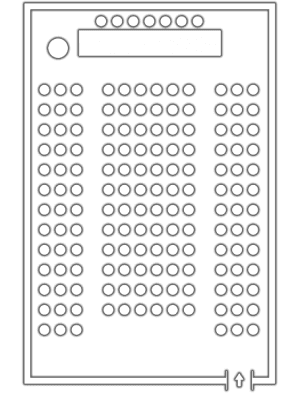 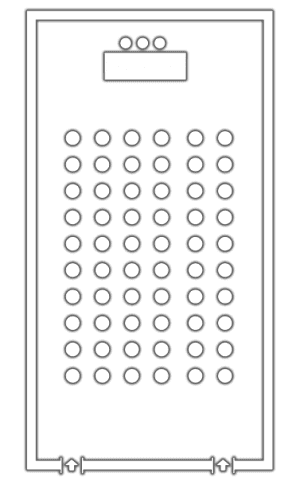 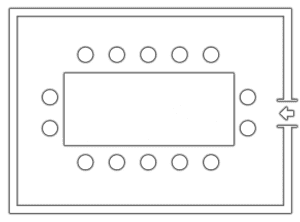 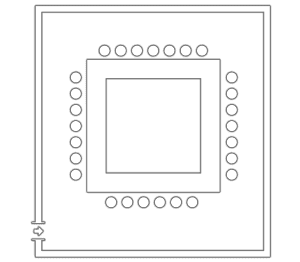 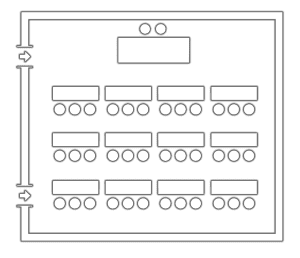 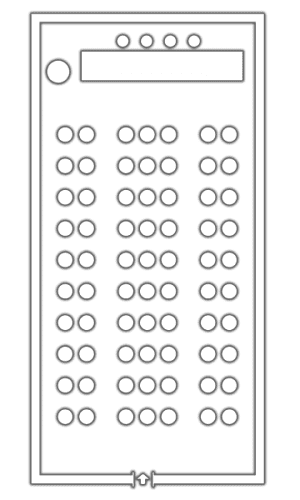 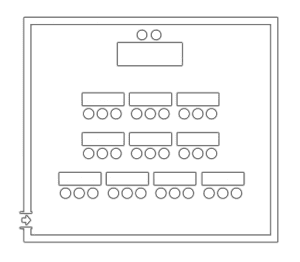 Hall 12
The hall, next to the Main Hall, is perfectly suitable for hosting executive offices of large conferences.
Availability request